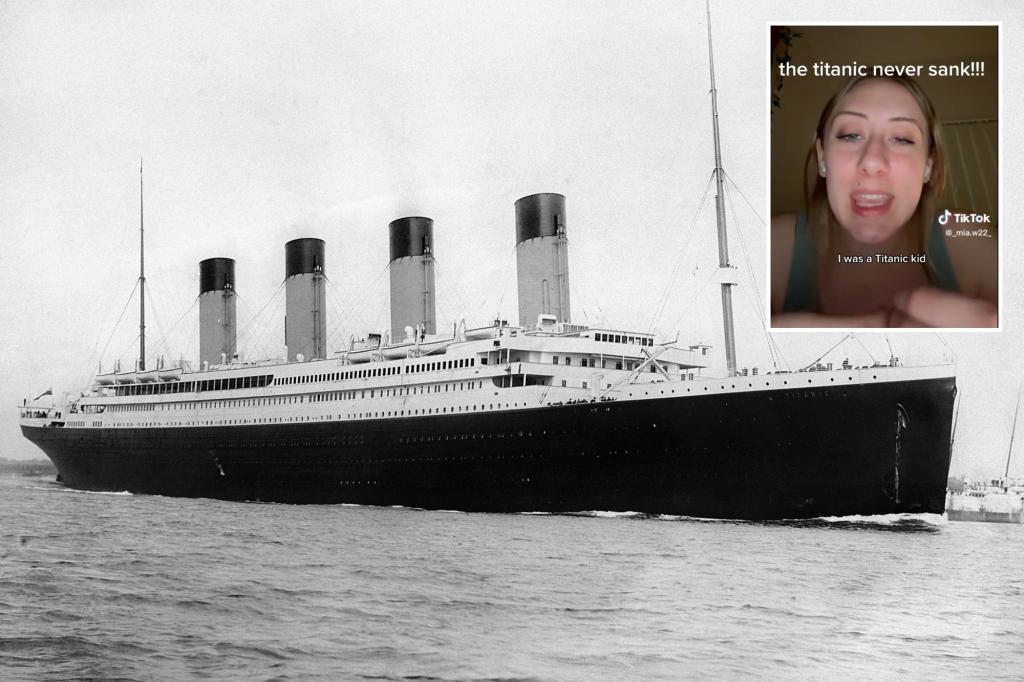 a viral video With over 11 million views on TikTok it is claiming a very convincing theory that the real Titanic never sank.

Instead, a woman named Mia believes that it was the Olympic ship that was purposefully submerged – to avoid the exorbitant cost of repairing it.

“I was a Titanic kid, which means I knew literally every single fact about Titanic,” Mia says. “My a** used to watch and watch documentaries for hours and hours and hours. But when I heard the theory, it all made sense.

“White Star Line – a super important shipping company built three super remarkable ships. We have the Titanic, the Olympic and the Britannic,” she continued. The British company was one of the world’s foremost shipping lines, providing passenger and cargo services between the British Empire and the United States at the time.

“The Britannic was the first one to go – it was a warship and people say it hit the water like a landmine. But no it didn’t. It was hit by a torpedo German U-boat And it sank.

“As you can see, it looks like the Titanic. Like different colors. And you can see where it was hit.”

There have been conflicting reports as to whether the ship was sunk by an enemy submarine, or if it was caused by a mine.

“And then we have the Olympic and the Titanic. They look alike,” Mia continues in the video. “Olympic had been on the water for a while. She was approaching retirement and they knew it. They were like ‘That was a lot of money to build Titanic, and there’s going to be even more money to repair Olympic. So what? What if we instead shipped the Olympic out, sunk that hoe, claimed some of the insurance money, and then scrapped the Titanic as if it were the Olympic for some spare parts.

Mia believes that no one really knew what the Titanic’s interior really looked like, except for those who built it – suggesting that both would be easy to overturn.

Mia then goes on to describe some notable people who chose not to board the Titanic at the last minute, including JP Morgan – Prominent banker, and who owned the White Star Line.

Milton Hershey, of the famous Hershey’s chocolate brand, did not board the Titanic despite having already paid the deposit. Instead he went on a German liner, the America, because the businessman was needed at his chocolate factory sooner than previously thought.

However, Mia doesn’t mention the Vanderbilts—who also made the last-minute decision not to go on the Titanic.

“Were they told not to do it because they knew it was going to sink?” Mia asks, noting also that number of holes were not matching.

In the end, their arguments supporting the theory fell on two boats that were nearby – the SS Californian, which is believed to have been the only ship to have seen the Titanic, or at least its rocket – but no one to assist. Did not take action.

Instead, it was the Carpathia, which came to the aid of any survivors 2 hours after Titanic sank.

“There was no Titanic plot on my 2023 bingo card 😳” one person replied to the video.

“It was planned.. Example: JPMorgan had more than one rival on the Titanic. He bailed out and they died, thus making his business a success,” said another person indulging in the conspiracy.

“No BC [sic] Why it makes sense (Titanic Kids Unite✊️).” An onlooker agreed.

“As a fellow Titanic kid I am living for this video,” wrote another.